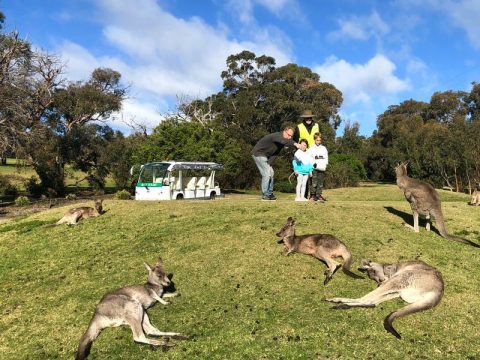 It’s little wonder that Australia’s most recognised national symbol – the kangaroo – is so closely tied to the identity of the Anglesea Golf Club. Our internationally renowned mobs of the Eastern Grey kangaroo have been part of the landscape at Anglesea for thousands of years.

They were here when Anglesea residents first proposed building the course and club back in 1950, though at the time they roamed across what was mostly gently rolling farm paddocks that edged up to natural bushland.

Now, of course, they roam across our immaculately kept fairways and greens, and, perhaps surprisingly, this unusual combination of grazing wildlife, greenkeeping and golf balls works extremely well.

During the past 70 or so years, our kangaroos – and there are estimated to be about 300 of them on or around the course at any one time – have grown accustomed to the constant activity and the number of strolling or motor-driven golfers passing by. In more recent times they have also become accustomed to even closer scrutiny from groups of holiday makers and international tourists.

As it turns out, our mobs of grey kangaroos are stars in their own right. During a normal summer season, they can draw as many as 5,000 people to Anglesea to watch the kangaroos as they graze and loll about on the greens and fairways. As capacities grow, there has been careful planning to ensure a safe nature-based tour is offered, alongside playing golfers.

“The kangaroos are always around somewhere, “says Les Cooper, the man in charge of operating the club’s renowned kangaroo tours.

“You can sometimes see them on the fairways during the day, but mostly they sit of lay down in the shade. They don’t interfere with the playing surface. Freshly cut grass doesn’t seem to be their favourite food. They prefer the longer grass at the edges and that’s where we see them feeding on young shoots and grasses.”

The tours are conducted daily during peak seasons, depending on demand. The club has two motorized tour carts which run independently or together as needed. The tours are conducted by volunteers from the club and the Anglesea community, who are full of information about the needs, habits, and welfare of the kangaroos.

“The mobs are usually in groups of about 40 or so and they are a very family-oriented kind of animal. During the breeding season they congregate in their groups and there are usually quite a few joeys hopping about,” says Les, who has been involved in the tours since they began operating in 2015.

The kangaroos at Anglesea are Eastern Greys or, in scientific terms Macropus giganteus which is Latin for “huge, big foot”. Our kangaroos are usually most active during the late afternoon and evening. Many of the kangaroos on the golf course have ear tags and/or collars with names.

Post graduate students and academic staff from the University of Melbourne’s Zoology Department began studying the kangaroos in 2004.  They have collected a wealth of information that assists in furthering our understanding of kangaroos and their interaction with their habitat. Marking individual kangaroos with collars and tags means that they can be followed throughout their life cycle. Collars and ear tags allow researchers to monitor kangaroo movement, growth, survival and reproduction.

The safety of our guests is paramount. For this reason, we reserve the right to cancel tours during total fire bans, when strong winds are prevalent, or when temperatures reach 37 degrees Celsius.  Pre-booked tours will be refunded.

Please, always follow your Driver’s instructions during the tour.  A golf course can be a dangerous place when golfers are playing.

Your tour driver will also give you advice on how close to get to kangaroos, managing children and noise levels. Kangaroos are very social animals, but it’s important to remember that they can also be quite aggressive if they feel threatened.